It’s time we give intolerance a playful kick in the pants.

How the transformative potential of play can help us find new common ground in our civic life. 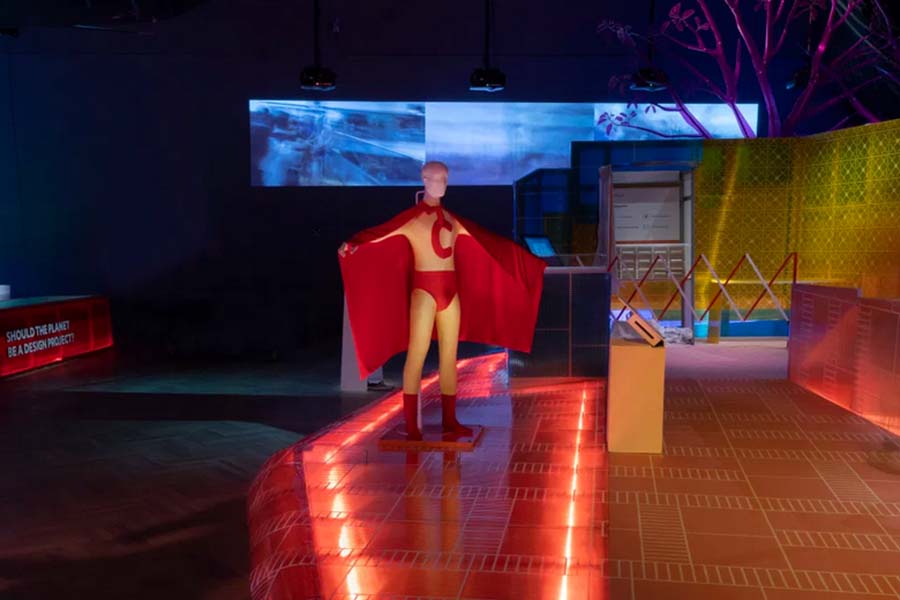 We have outrage fatigue. Whether flipping through cable news channels or skimming social media feeds, it doesn’t take long to witness the breakdown in our civic discourse. Particularly in the Trump era, our punditry has fed a debate-driven culture that rewards the outlandish and hyperbolic. In the process, we have seemingly lost the capacity to empathize with perspectives and opinions other than our own. We have forgotten that listening involves more than merely tuning in for what we want to hear, or waiting for someone else to finish before we speak.

Late night talk shows and Saturday Night Live use humor and sarcasm to ease the pain of not feeling respected or heard. The result is a generation of citizens inundated with entertaining opinion that strives to grab attention, rather than find common ground. While momentarily satisfying, such public mockery and vitriol ultimately further entrenches us into intolerance or indifference.

Journeying into the Past

Before the internet age, most of us got our news from a handful or sources. The Walter Cronkite’s of the world, who were expected to be a conduit but never a conscience of the news, gave us a common starting point as we often got our facts from the same place. It is tempting to lament the cohesiveness that a simpler media landscape afforded, but such non-partisan journalism also left out the voices of minorities. Indeed the 1960s and 70s—when American journalism’s infatuation with impartiality was near its height—were marked by protest marches, civil disobedience, urban riots and assassinations. Since then, the internet’s fractured journalism has enabled a host of new voices to emerge. Yet it has also bolstered echo-chambers of likeminded thought that increasingly impair our capacity to find common ground. How can we truly foster public cultures and ways of being in real relationship with one another?

Perhaps one of the most inspiring examples comes in the unlikely form of Antanas Mockus, the
professor-turned-politician who served as Bogotá’s mayor from 1995-1997 and 2001-2004. Following his dismissal as rector of the National University of Colombia in 1993 for mooning rowdy art students who had refused to let him speak, Mockus entered Bogotá’s mayoral race as an inexperienced independent and won by the largest majority in the city’s history. The only son of a Lithuanian artist, Mockus brought a distinctly creative governing approach to a city whose drug cartels, poverty, murder and corruption had earned it the inspired moniker “the worst city on the planet”. With a degree in philosophy, the unconventional mayor, who often appeared in public in a superhero-like “Supercitizen” suit, believed that the city would transform itself if he could inspire people to change their behavior.

Deeming ‘Bogotanos’ to be more fearful of ridicule than fines, Mockus replaced the notoriously corrupt traffic police with 420 trained mimes who made fun of traffic violators. Drivers were given ‘thumbs up’ and ‘thumbs down’ signs to further encourage good behavior, while pedestrians who jay-walked or blocked traffic received yellow or red cards similar to those used by soccer referees to signal fouls. 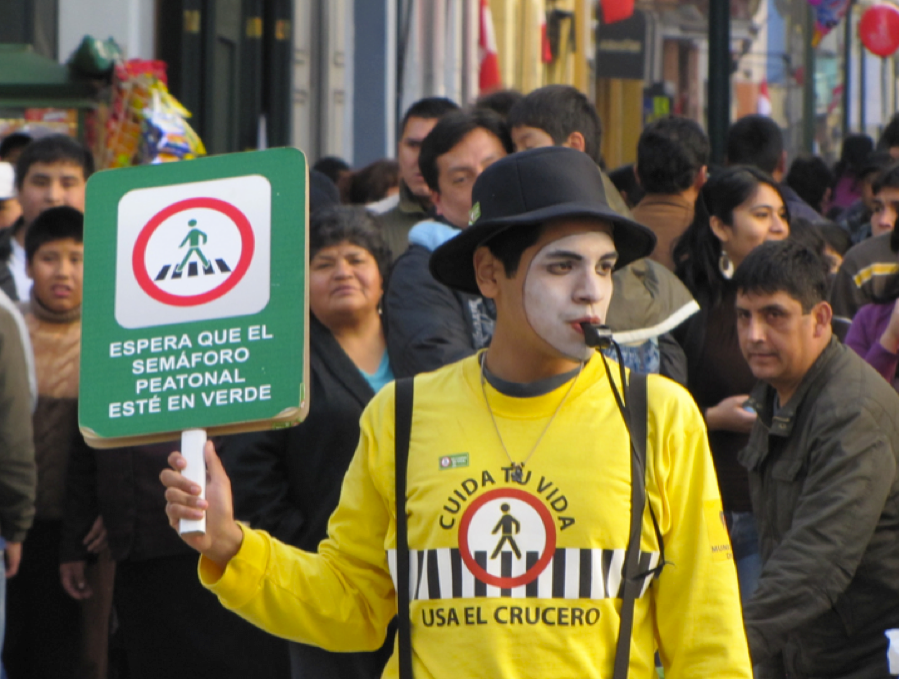 During a water shortage, Mockus appeared on television taking a shower and turning the water off while he soaped, asking fellow citizens to follow suit. Within two months the city was using 14% less water.

Mockus also asked people to call his office if they met a kind and honest taxi driver. He then organized a meeting with all of these taxi drivers who as the newly appointed “Knights of the Zebra” advised him on how to improve the overall behavior of the others.

Of his unconventional approach, the Supercitizen explained, “if people…are sensitized by art, humor, and creativity, they are much more likely to accept change, and each other.” By focusing on the hearts and minds of his citizens and employing unconventionally artistic strategies, Mockus created an atmosphere of optimism bolstered by the power of the individual and communal pride. His playful antics helped Colombian citizens become more open to seeing each other’s shared humanity and feel empowered to affect change. During his first term as mayor, the homicide rate decreased by 70%, traffic fatalities decreased by 50%, and 63,000 residents voluntarily chose to pay more taxes.

As a state of mind, play has the ability to foster mindfulness, responsiveness and yielding. It helps us give ourselves over to the moment, to the other, and to the relationship beyond the words we say. Contemporary projects, such as Hirsch & Mann’s Stop, Smile and Stroll and Ralph Borland’s Suited for Subversion demonstrate how play creates a better human experience by lowering our defenses and opening us to the potential for a meaningful encounter. And in that space, something revelatory can happen. We learn to experience each other differently, and find a bridge to the ‘other.’ 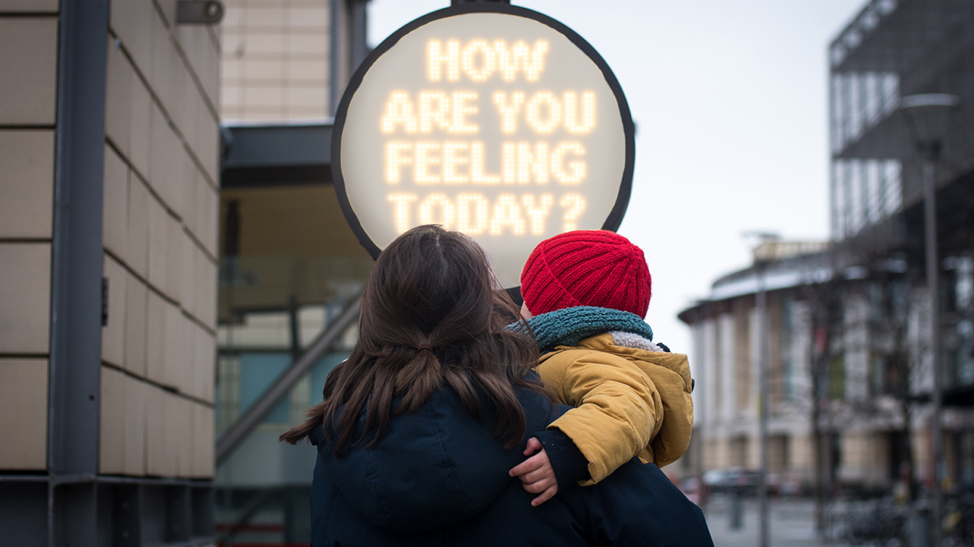 Hirsch & Mann’s Stop, Smile and Stroll (2018) – a playful intervention for pedestrian crossings that asks pedestrians to express their current mood through facial expressions that it reads to determine the city’s collective ‘mood of the moment.’

Krista Tippett, host of the award-winning radio program On Being, makes a case for why we need ‘bridge people’ today more than ever. “There is a human change that makes social change happen that is much quieter and more dispersed. It has to do with a quality of relationship between unlikely combinations of people that must be fermenting in place before the overturning of structures.” Play can act as that necessary starter culture.

What creative thinkers might help us approach this issue in new ways? Our proposed frame-changers: The Impish Idealist: Antanas Mockus
The original Supercitizen, and former Mayor of Bogotá, for his zany philosophy-backed creativity, his bravery, passion, honesty, modesty and playfulness.

The Court Jester: John Oliver
Comedian, writer, producer, political commentator and television host of Last Week Tonight, for his ability to provocatively reveal who we are with his expertly researched exposés, and propose playful actions that move us forward.

The Sage Space Holder: Krista Tippett
The wise and gentle force behind the award-winning radio program On Being, which delves into the mysteries of human existence and explores healing in our fractured civic spaces.

The Boundary Spanner: Kwame Anthony Appiah
Ghanaian-British philosopher, cultural theorist, and novelist exploring the ethics of identity in civic life. His elastic mind illuminates the lies that bind us and divide us, and the truths that connect us across creed, country, color, class and culture.

The Fantastical Provocateur: Nelly Ben Hayoun
“She went to Mars, met with the dinosaurs, engaged with politics, lived for 100 years and married a few astronauts. She lived every day to its extreme, thinking that nothing is impossible to achieve.” Thus reads the aspired obituary of Nelly Ben Hayoun, the French firecracker who has been dubbed the “Willy Wonka of Design and Science”. A fearless explorer and a self-described director and creator of the impossible, Hayoun wastes no time leading us into the wild and whacky.