What if we enlisted kids to help us make the future female AND male?

How Andrew Schlesinger’s GENTLEmen challenges us to reframe the way we teach kids about gender. 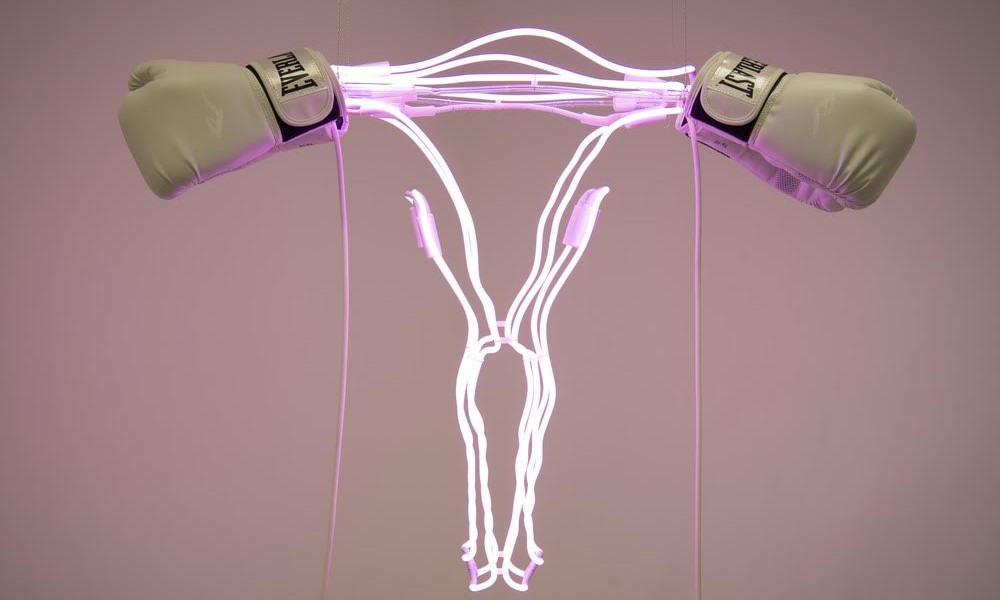 The #MeToo movement has done much to highlight gender as one of the central social issues of our time. As a mother of two young boys in this age of ‘toxic masculinity,’ I think a lot about how to raise modern men.

Most of what we hear today is about changing notions of femininity. Women are told to lean in, and to raise girls to be just as strong as boys. However, encouraging girls to take on more traditionally masculine traits simply asserts that women can play a man’s game. Similarly, slogans like ‘the future is female’ are inclusive of women at the expense of men, thereby only reinforcing the very hierarchical power structures that feminists strive to free themselves from.

On the flip side, what we continue to teach boys about masculinity has largely remained stagnant. To be popular and successful, men are told to be confident, decisive, powerful and strong; that “boys don’t cry.” I often worry about my sons becoming trapped in our singular notion of manhood, and yet to encourage them to be vulnerable means to risk them being bullied.

It therefore felt like a fresh breath of air to come across the thesis work of designer Andrew Schlesinger. As a graduate student, Schlesinger spent a year in the vibrant Products of Design program at New York’s School of Visual Arts, exploring how we can reframe the way we teach boys (and girls) about gender.

In his research he was struck by the renowned gender theorist Judith Butler, who argues that our notions of gender are much more created than fixed. Butler believes that the traits and characteristics we’ve assigned to gender are adaptable and subject to change, based on our social expectations. Similarly, our understanding of the human brain reveals that, no matter the gender we are born with, we all have masculine (logical, driven, analytical and fast-paced) and feminine (creative, sensitive and intuitive) sides. Gender traits are therefore much more fluid than we acknowledge, as we each engage in an ever-changing flow of masculine and feminine energies. 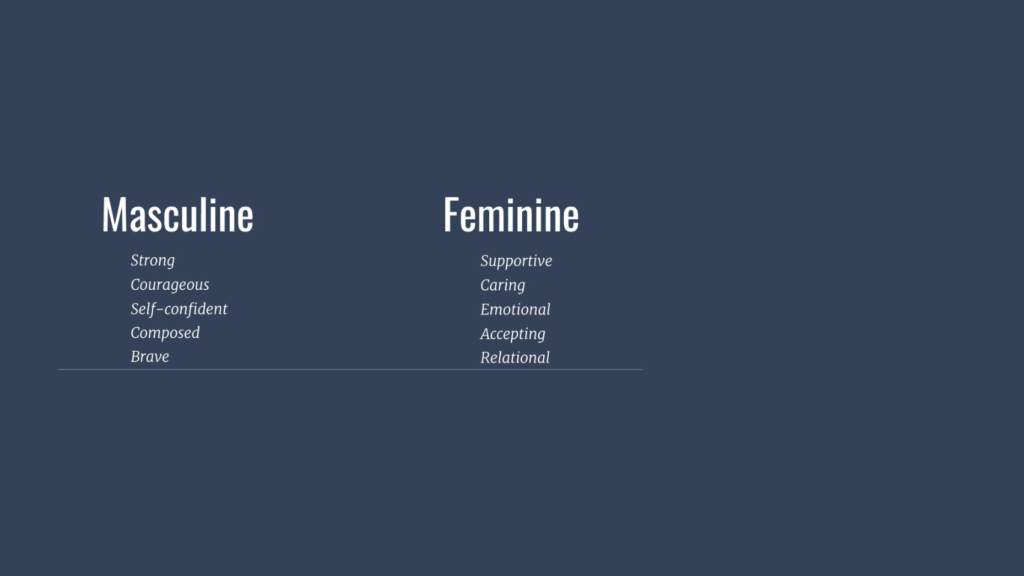 Though our concepts of gender may be largely a story of our own making, our notions of gender norms solidify early in life, and are well-established by the time we are just 7-10 years of age. In light of this, Schlesinger chose to tailor his interventions towards young children whose ideas of gender were still malleable. The result is GENTLEmen, a range of tools for educators and parents to raise boys who can flex their emotional muscles and value both their feminine and masculine sides equally.

GENTLEmen includes Pledge of Emotions, a classroom-based program that is devoted to increasing pre-Kindergarten students’ emotional intelligence. Each morning one child within the class is selected to act out the emotion of the day, while the others try to identify what it is. The class then watches videos on alternative ways to express that emotion. 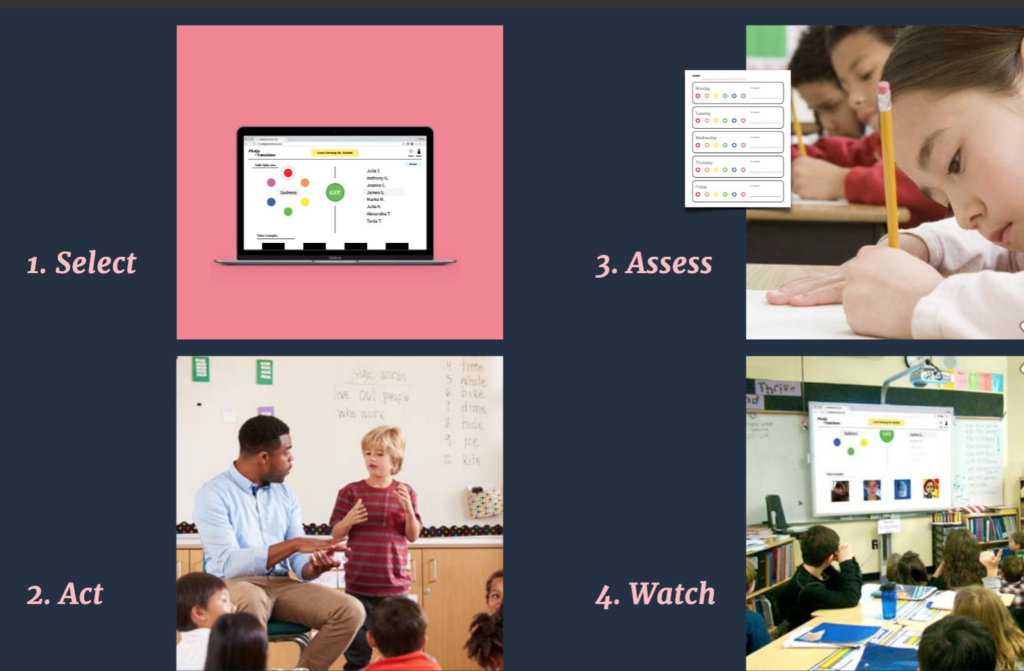 Storytime, a concept for a media curation app, is meant to give parents and caregivers the ability to filter childrens’ media content to only include those with healthier gender narratives.

Schlesinger also turned his attention to the Boy Scouts, a community organization that continues to have broad influence on young males. His resulting Boy Scout Merit Badges uses the organization’s merit badge tradition but moves beyond established categories like Home Repairs, Camping and Emergency Preparedness to propose more modern ones such as Peacemaking, Caregiving, Cleaning, Dancing and Poetry Writing. 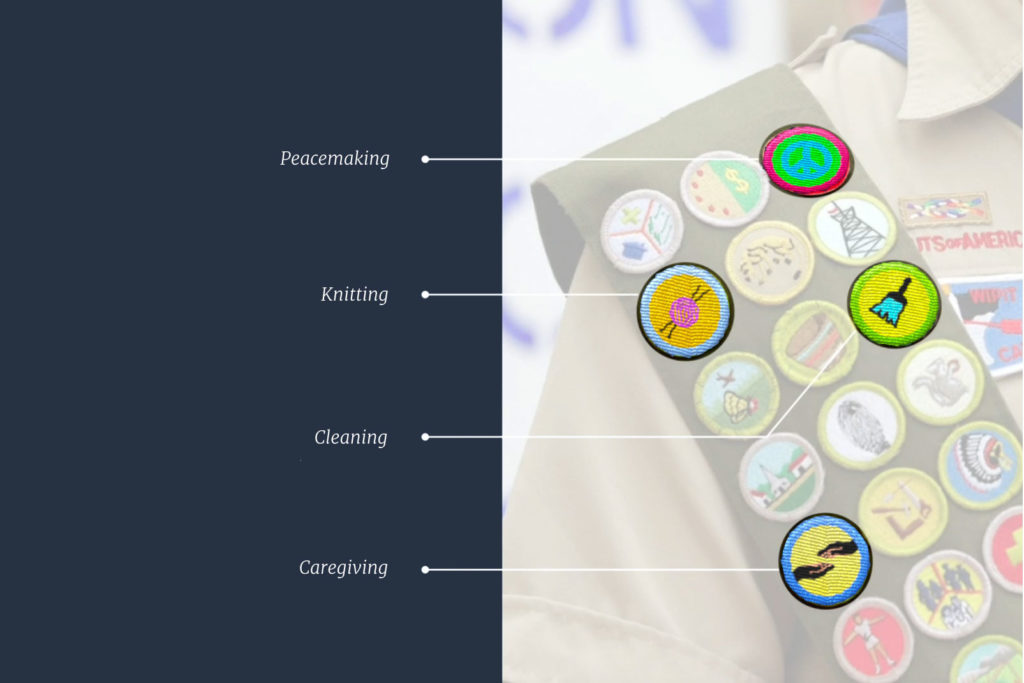 Why it Moves Us, Forward

GENTLEmen encourages us to reexamine the gender norms we often take for granted and the ways that we are perpetuating them through our children. It acknowledges that we all have the capacity for a full spectrum of masculine and feminine traits and probes what having equal claim to express them might look like. While children definitely won’t have all of the answers, they could inspire us all to do the much harder, more complex structural change work to fundamentally reshape the gender norms we often unwittingly reinforce.

Where We Can Go from Here

By suggesting we subvert the system from within, GENTLEmen invites a conversation to affect a more systemic cultural change. However, ultimately we cannot ask boys to be emotionally open if we are unwilling to see men – especially societal or popular role models – be vulnerable, nor can we tell girls to be empowered and then slander strong businesswomen as cold and calculating.

I could envision Schlesinger teaming up with Disney’s Little Inventor’s Project, which helps children turn their ideas for inventions into reality. Together with the Dominic Wilcox, the British designer, artist and inventor already involved, Schlesinger could help steer Disney away from princess-inspired initiatives , and challenge children to dream up inventions that attempt to reframe gender stereotypes. Disney could then use its cultural capital to broker partnerships with the entertainment industry or corporations and more broadly re-envision contemporary scripts around masculinity and femininity in pop culture. Ultimately, a newfound freedom to explore the full spectrum of ourselves without judgment or expectation could enable us to be more authentic with ourselves and each other.

How else can we encourage our kids from an early age to be more authentic with themselves and others? Submit your visions to the Future Field Prize. 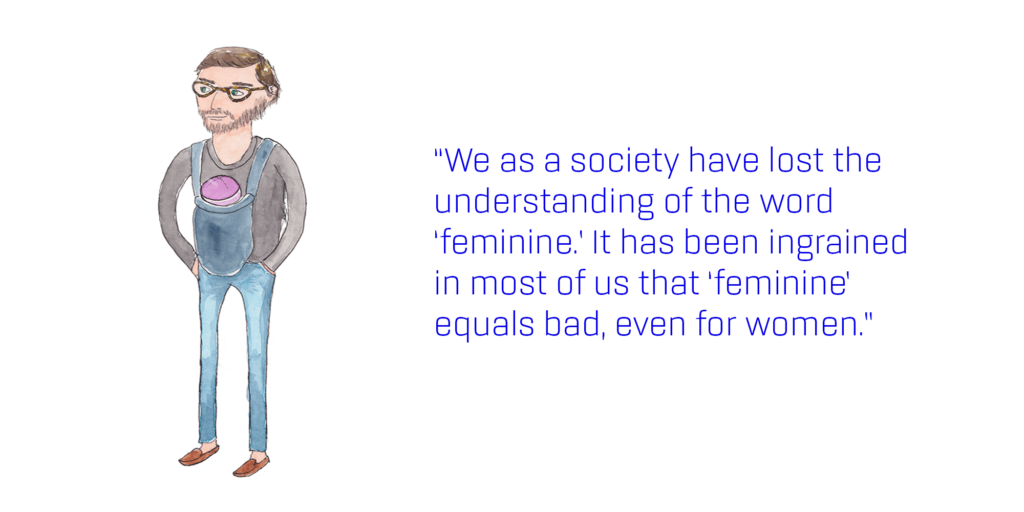 Andrew Schlesinger is an industrial designer on a mission to expose cognitive biases and failed human action. Before moving to NYC, he spent 5 years in San Francisco working at Apple, as part of the Manufacturing Design team for iPhones 4S to 7. A recent graduate of Products of Design MFA program at the School of Visual Arts, he is passionate about identifying opportunities to tackle complex, networked challenges through cross-functional research and collaboration. Andrew currently leads patient-centric initiatives at the healthcare startup TrialSpark.

Raising Boys with a Broader Definition of Masculinity | The Atlantic
The Future is Feminine | Medium
Why Girls Can be Boyish but Boys Can’t be Girlish | CNN
Can Kindness be Taught? | NY Times