What if our neighborhoods could come alive with regenerative energy?

How Daan Roosegaarde’s ‘Gates of Light’ and ‘Windvogel’ prototype a wondrous path toward a regenerative world. 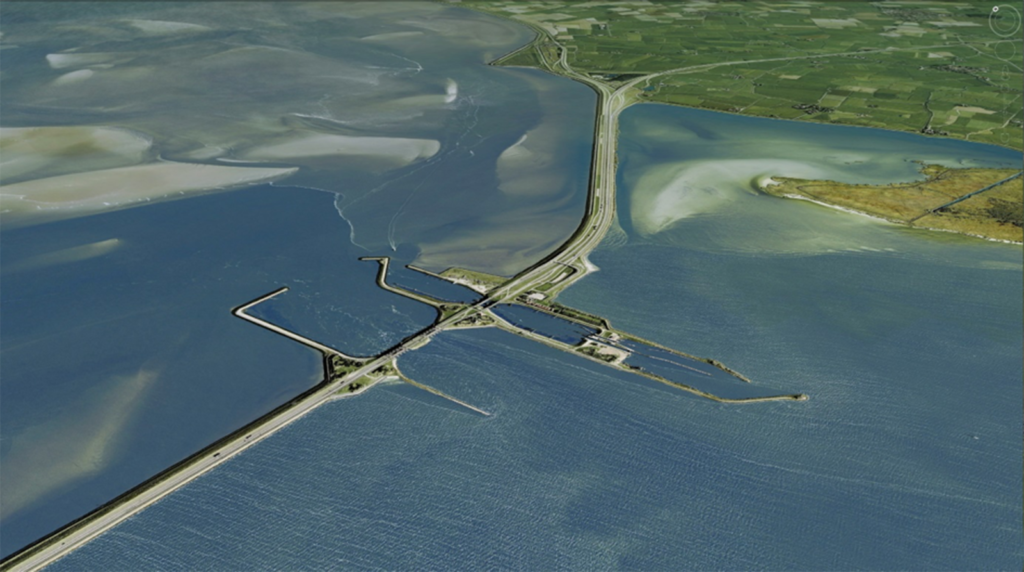 In 2017, the Dutch Government approached Studio Roosegaarde, the Rotterdam-based lab of German-Dutch designer Daan Roosegaarde, with the challenge to enhance the innovative nature of the Afsluitdijk, the legendary national dyke, built in 1932, that stretches 32 kilometers along the sea. Known for its imaginative approach to making the world more sustainable and beautiful, the studio has gained a reputation for its Willy Wonka-like approach to problems at all scales. From giant air-purifying towers that suck carbon out of city air and harvest it to make jewelry, to nightclub dance floors that generate electricity through the act of dancing, Roosegaarde uses technology as a tool to bring poetry into the world. Uniting all of the studio’s wide-ranging projects is “schoonheid”, a difficult-to-translate Dutch word that has two meanings: firstly, a type of beauty that comes from inspirational creativity—“it can trigger people to engage with the world around us”, Roosegaarde explains—and secondly, ‘clean’, as in clean energy and technology. For Roosegaarde, “schoonheid” sums up the values of our future society. 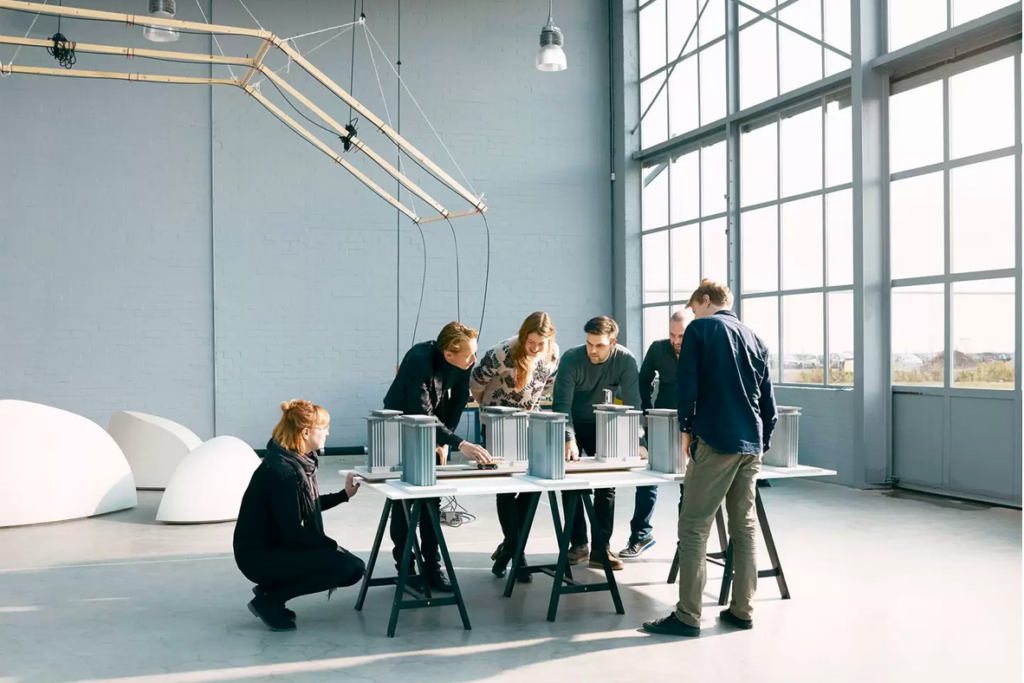 To respond to the Dutch government’s request, Studio Roosegaarde realized two projects. The first, ‘Windvogel’, was awarded Dezeen’s Project of the Year in 2018. Large kites containing mechanisms to generate electricity are flown above the dyke, harnessing the wind above the sea and supplying energy for up to 200 households. At night, the cables tethering each kite to the ground are illuminated, providing a simple visual clue of the wonders of nature and highlighting the magic of pulling energy from the sky to earth. 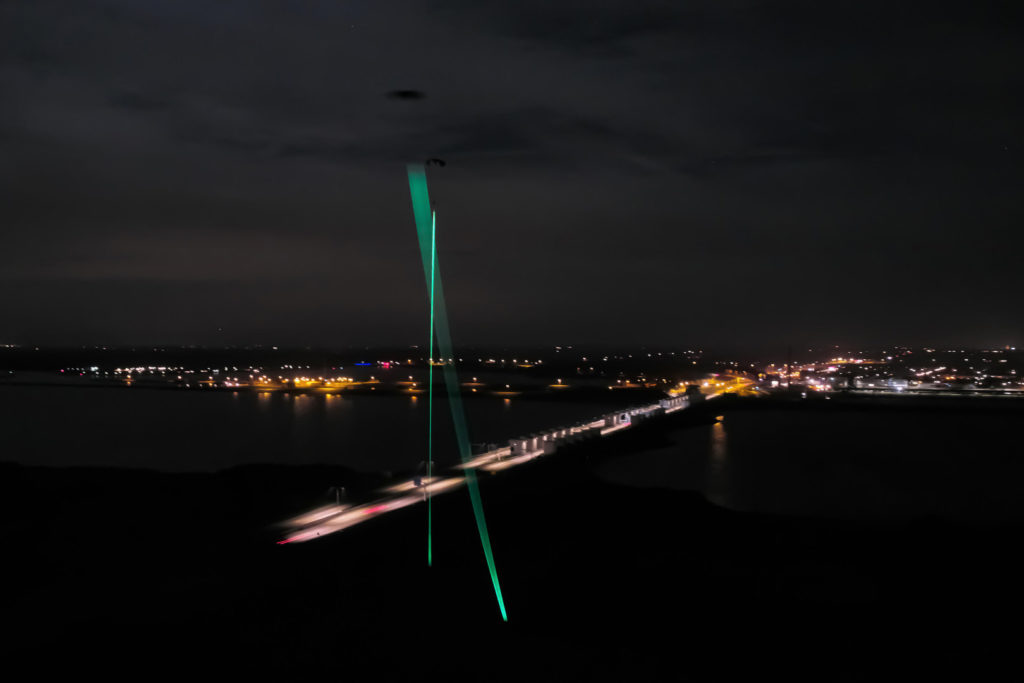 The second initiative, ‘Gates of Light’, uses the headlights of passing cars to trigger retroreflective material that outlines that structure of the dyke at night. As cars drive through, the architecture is illuminated, creating a magical spectacle without electricity or light pollution and making the passerby feel as though they are inside the architectural blueprint of this engineering wonder. Gates of Light was awarded the Platinum A’ Design Award. 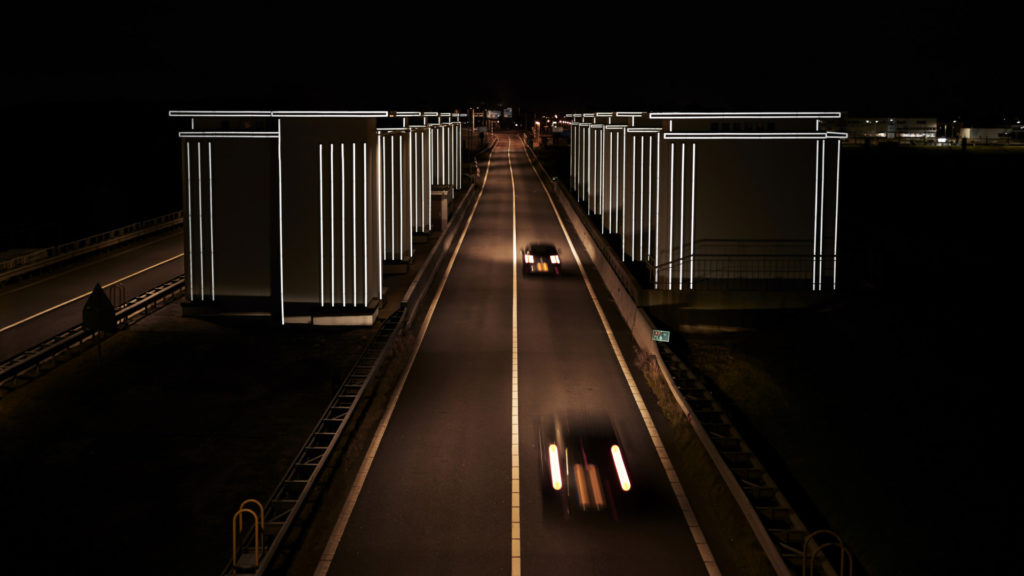 As with most of Studio Roosegaarde’s work, ‘WindVogel’ and ‘Gates of Light’ partner with the natural world to prototype new ways of inhabiting it. “I think it’s so important to make collective experiences, where people feel connected with a vision—with a future—and trigger what is possible,” Daan explains. In their playful, sophisticated yet simple approach, both projects highlight the  technological aspects of the dyke and feed our sense of interconnection with nature. They invite us to marvel at nature’s ability to generate energy, and to appreciate our ingenuity and ability to co-generate it. Where We Can Go From Here

‘WindVogel’ and ‘Gates of Light’ help us to dream into more wondrous possibilities for our energy infrastructure. Organizations, such as NYC CoolRoofs can learn about ways to harness collective agency between citizens and the environment. An initiative of New York City’s Department of Buildings, CoolRoofs is dedicated to whitewashing roofs on public properties, affordable housing, cultural institutions and hospitals, reducing their heat capture and air conditioning use by up to 30%.

While an impressively simple and impactful achievement, most citizens remain unaware of what is happening right above their heads. What if it were made tangible and visible? Imagine how the city could include Studio Roosegaarde’s magical approach to create not just CoolRoofs or CoolBuildings, but CoolNeighborhoods; where entire city blocks come alive with hyper local renewable energy generation powered by the wisdom of nature and the wonder of its citizens. The Dutch designer and innovator Daan Roosegaarde is on a mission to make truly engaging and sustainable environments. From an early age, Daan was drawn to luminescent phenomena in nature, such as light-emitting fireflies and jellyfish. This fascination, combined with his passion for technology drives him to create imaginative and engaging prototypes for humans and nature to thrive together.  Daan founded Studio Roosegaarde in 2007 with a desire to make the world more understandable, interactive and open. Now, with offices in both Rotterdam and Shanghai and numerous awards to their name, the studio employs a talented team of artists, designers and engineers to explore and shape new ‘landscapes of the future’.

Daan Roosegaarde: A Monograph | Phaidon
Beauty? It’s not a branded bag, it is clean air. An Interview with Daan Roosegaarde | Domus
Design by Nature | World Economic Forum
A Man on a Mission to Make Humanity ‘Future Proof’ | Fortune
Daan Roosegaarde in his Studio | Freunde von Freunden